Today was a test day, to go through the PALS/Twin Otter flight operations, and for the ground teams to get familiar with the soil and vegetation sampling equipment and the field site locations.

We were at the airport by 8 am. The plane was outside being prepared by Richard and Dave (pilots). Andreas worked on the antenna external calibration target while Seth and Ian checked out the PALS electronics.

After the pre-flight briefing, take-off occurred as planned at about 10 am. The plane climbed and headed northwest towards Lake Manitoba for high and low altitude calibrations over water, and then turned southward to test maneuvers and data collection over a few of the designated field site flight lines. At 11:30 am the plane landed back at Winnipeg and we went through the debrief. Andreas checked the data back at the hotel (downloaded onto a thumb drive).

Things had gone well - some interference was noticed in one of the radiometer channels that we'll need to track down (source likely internal to the aircraft), and we reviewed how precisely we need to have the aircraft attitude controlled to get good science data. All in all this was a good flight test day.

At 3:15 pm we had our first "Go/No-Go" telecon. These telecons will be held twice daily - once in the evening (normally 4:45 pm) and once in the early morning (5:45 am) - to decide whether the plane will fly the next day and what kind of field sampling will be done (soil moisture, roughness, vegetation characteristics, or none). These decisions are largely determined by the weather status and the most recent forecast. We decided that tomorrow would be a "Go" day, even though the presence of high-level clouds might restrict the PALS/Twin Otter to just flights of the low-level lines.

Our gracious hosts had planned an after hours social event at the Pony Corral Pier 7, so we drove over and enjoyed the cool of the evening in good company after the very warm day. 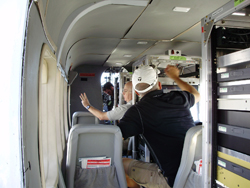 Not much room for Ian, Seth, and Dave (co-pilot).