The SMAP Observatory will be launched into Earth orbit aboard a Delta II rocket, built by United Launch Alliance (ULA) under contract to NASA’s Launch Services Program Office at the Kennedy Space Center. The Delta II is a versatile and reliable rocket that has several different variants, and has been used in both Earth orbit and planetary mission launches over the past 25 years. The specific version of the Delta II used for SMAP employs two stages using liquid rocket engines, supplemented by three solid propellant rocket motors strapped to the first stage. The first stage, along with its solid rocket motors (SRMs), lift the vehicle out of the Earth’s lower atmosphere. The second stage steers the SMAP spacecraft into the correct orbit using its onboard guidance system. The fairing protects the spacecraft from heating and large aerodynamic forces experienced during 1st stage ascent. Once the 2nd stage is out of the atmosphere, this protective fairing is jettisoned after it is no longer needed.

The sequence of events from liftoff through spacecraft separation from the Delta II upper stage has many steps. The launch is one of the most complex and time-critical phases of the mission, leading up to the SMAP spacecraft’s separation from the Delta II upper stage. Following separation, the spacecraft deploys its solar array, orients itself to point the array at the Sun, then establishes radio contact with both ground stations and TDRS satellites to relay telemetry data on spacecraft health back to the SMAP Mission Operations Center (MOC) at JPL. 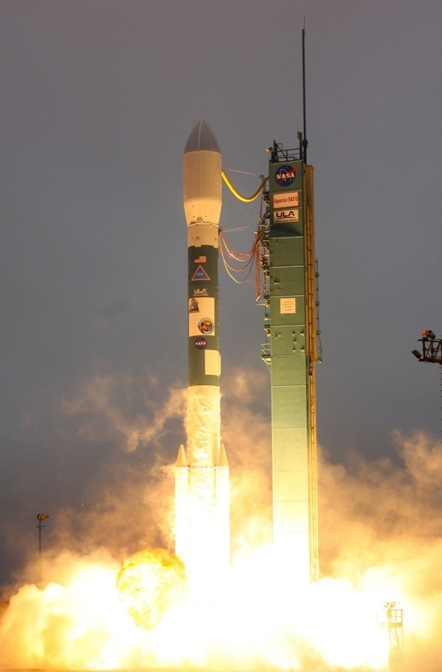 The SMAP observatory is scheduled to launch from Vandenberg Air Force Base near Lompoc, CA aboard a United Launch Alliance Delta II 7320-10C in November 2014.